Drone swarms can now fly through dense forest on their own. 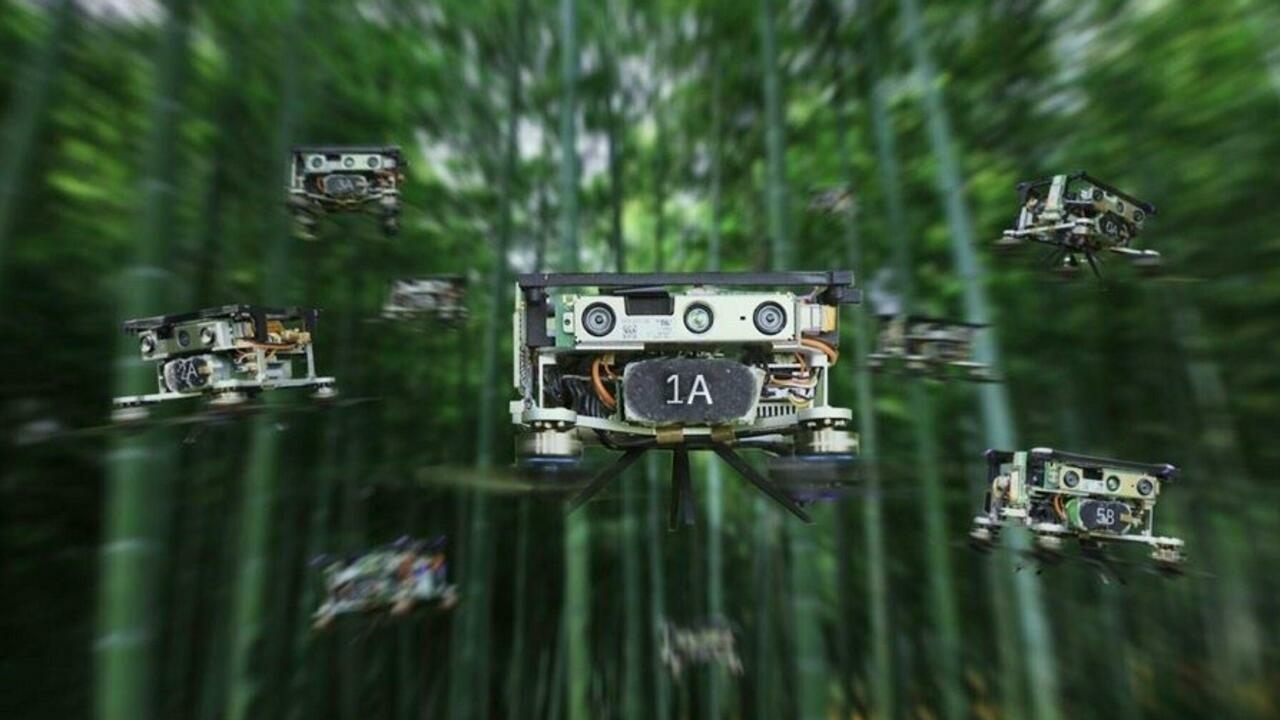 A swarm of ten bright blue drones takes off in a bamboo forest in China, then swerves its way through the woods, avoiding tangled branches, bushes, and uneven ground as it autonomously navigates the optimum flying path.
The experiment, led by Zhejiang University academics, evokes scenes from science fiction films, with the authors citing “Star Wars,” “Prometheus,” and “Blade Runner 2049” in the beginning of their research published Wednesday in Science Robotics.

The team, led by Xin Zhou, wrote, “Here, we take a step forward (to) such a future.”

Aerial mapping for conservation and disaster relief operations are just two examples of real-world uses. However, the technology must advance so that flying robots can adapt to new situations without colliding with one another or objects, putting public safety at risk.

Drone swarms had previously been tried, but only in wide environments without impediments or with the location of such obstacles programmed in, according to Enrica Soria, a roboticist at the Swiss Federal Institute of Technology Lausanne who was not involved in the study.

“This is the first time a swarm of drones has successfully flown outside in a wild, unstructured environment,” she said, calling the experiment “amazing.”

Drone swarms can now fly through dense forests without colliding thanks to a new flight path planning technology. Yuman Gao and Rui Jin credit
The palm-sized robots had depth cameras, altitude sensors, and an on-board computer. The most significant advancement was a sophisticated algorithm that combines collision avoidance, flight efficiency, and swarm cooperation.

Swarms could be used during natural catastrophes because these drones do not rely on any external infrastructure, such as GPS.

For example, they could be dispatched to earthquake-stricken areas to assess damage and determine where assistance should be provided, or to places where people should not be sent.

Single drones might certainly be used in such situations, but a swarm approach would be significantly more efficient, especially considering the short flight periods.

Another option is to have the swarm lift and deliver big goods collectively.
Swarms could be weaponized by militaries in the same way that single remote-piloted drones are today. The Pentagon has indicated interest several times and is conducting its own testing.

“Military research is not openly shared with the rest of the world,” Soria explained, “so it’s difficult to envision where they are in their growth.”

However, improvements published in scientific journals could be exploited to military use.

The Chinese team put their drones through a variety of scenarios, including swarming through a bamboo grove, avoiding other drones in a high-traffic trial, and following a person’s lead.

In a blog post, Zhou noted, “Our approach was inspired by birds that fly smoothly in a free swarm through even very dense woodlands.”

He described the difficulty as balancing competing demands: the need for small, lightweight machines with high computational power, as well as plotting safe trajectories without significantly increasing flight time.

According to Soria, it will only be a few years before such drones are used in real-world situations. They must first be evaluated in ultra-dynamic contexts such as cities, where they will continually come into contact with people and cars.

Regulations will have to catch up, which will take more time.