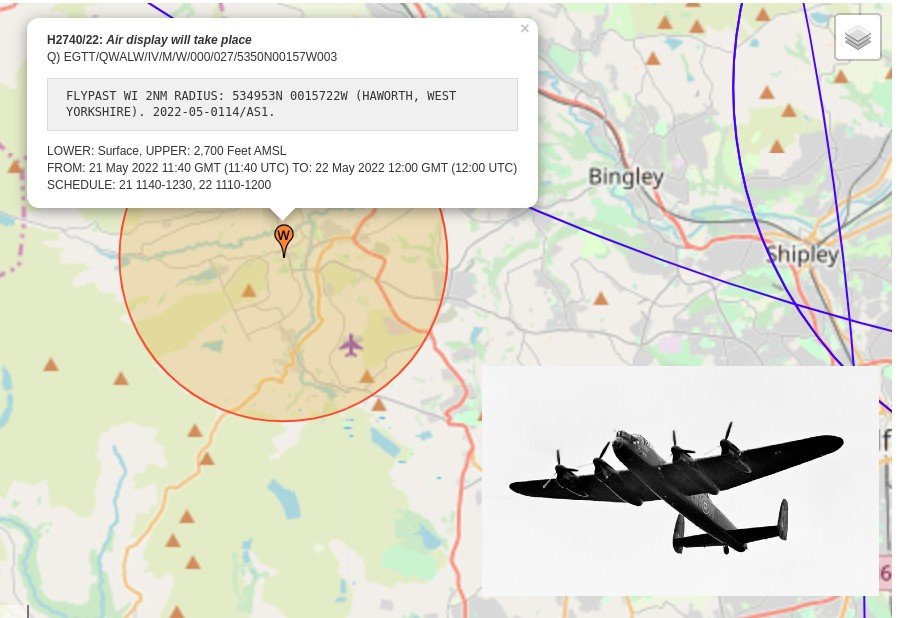 Simon Dale of FPVUK is likely to have a busy day ahead of him. Simon has made significant progress in lobbying for safe FPV flight and has the regulator’s ear. He’ll be taking calls about a mammoth display of poor judgement by an FPV driver, and the UK Airprox Board will undoubtedly assemble to discuss it.

The Battle of Britain Memorial Flight Lancaster passes over Warley Reservoir just to the south of a NOTAMed air display, according to YouTube user Spaceport Seven. The show featured a flyover of Haworth’s 1940’s Weekend.

Things happen when you’re flying, and it’s vital to learn from them, but posting a YouTube video for clicks isn’t the place to start that learning process. It was almost as though it was a ruse.

Can you tell I’m angry? This is exactly the kind of stuff that, as Bruce points out, will poison the regulator against sane users.

I’ll include Spaceport Sevens’ comment and video, but I expect it to be removed from YouTube soon. It’s a stretch to say that he or she was flying legally.

The Lancaster is loud, and the flypast was publicised in the local newspaper and on television, as well as being NOTAM’d. Good airmanship demands that the FPV pilot be aware of what is going on in the sky around them while flying.

Of course, they should have had a spotter who would have seen and heard the Lancaster approaching and advised on the best course of action to take.

They appear to have turned towards the Lancaster and then chased it for a while in the video, but that’s just my impression.

The BBMF pilots and crew, like the Red Arrows, are at the pinnacle of their professions, receiving promotions as a result of their ongoing brilliance. I’m sure they saw the FPV model and decided it wasn’t a threat, so they went on.

Of course, the Lancaster would have smashed the foamie and faced far more formidable opponents 80 years ago, but that isn’t the point.

Come on, people, if we want a free, fair, and shared sky for everybody, we need to start practising airmanship.

It’s not every day that something like this happens. This has completely blown me away; I was surprised to see a gigantic aircaft go past so close to me, and I certainly wasn’t expecting it to! Brilliant, and I hope the Avro pilots smiled when they saw my plane. I was flying at around 70 metres height, roughly over where I was standing, and was well within my legal limitations. The aircraft I was flying was a Heewing F-01 electric driven foam model with a wingspan of 690mm. It was a mix of little and enormous! 2022-05-21 12-50 in the vicinity of Halifax