Inside a Disney theme park, the first drone show debuted. 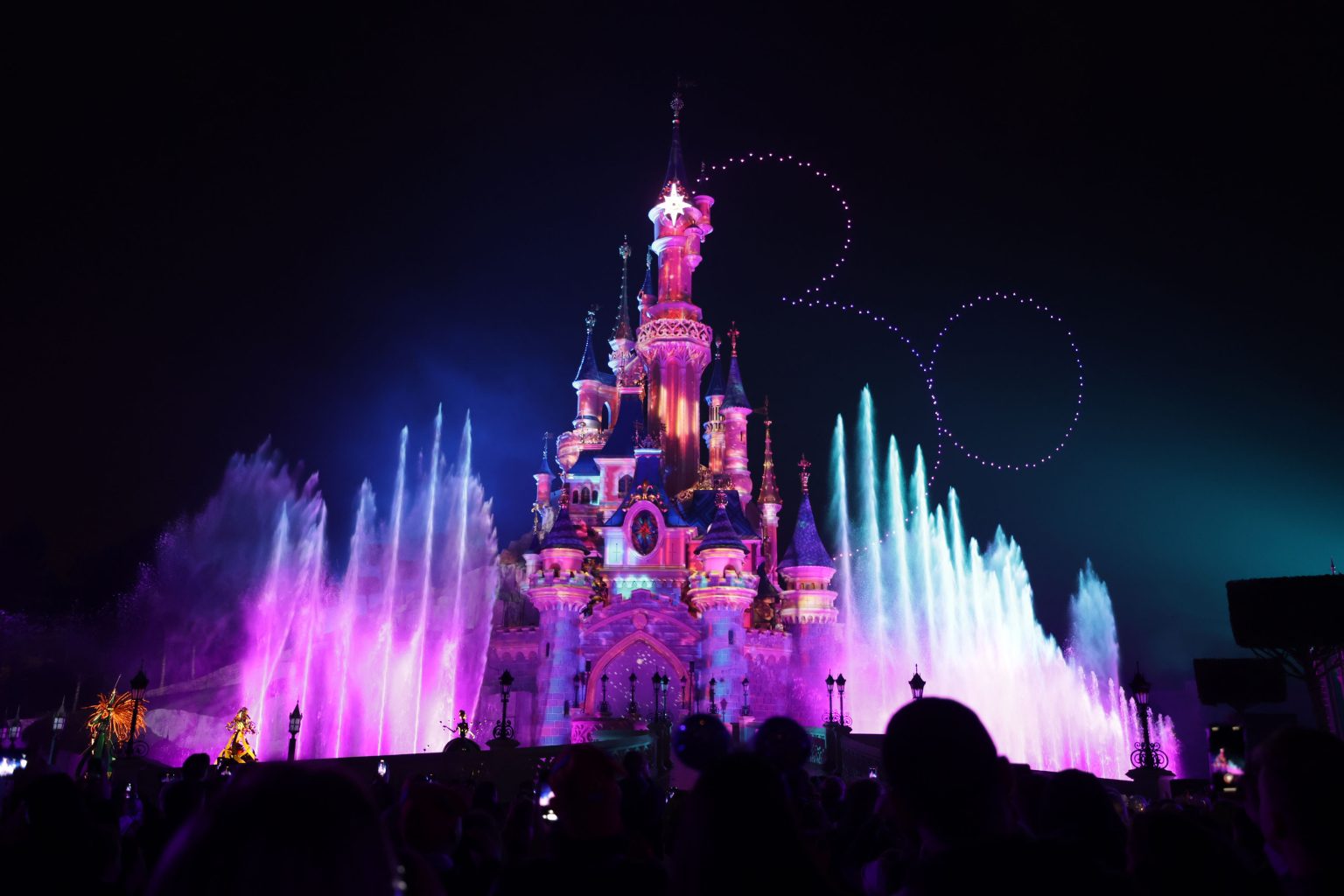 With Disney D-Light, Disneyland Paris celebrates its 30th anniversary, culminating in a silhouette of Mickey Mouse’s ears created by 150 color-changing drones. Caroline Reid and Christian Sylt are the authors of this piece.

Disney’s theme parks are known for their AV advancements. It was the first to employ audio-animatronics — eerily lifelike robots synchronised to voice – in 1963. With the release of Magic Journeys, a film about life through the eyes of a kid, Disney gave millions of guests their first taste of 3D nearly two decades later. While its most recent demonstration of technical wizardry may not appear to be as groundbreaking, it actually creates a powerful spell.

In April, Disneyland Paris celebrated its 30th anniversary by launching a spectacle featuring 150 color-changing drones that swarm above the park’s centrepiece Sleeping Beauty Castle before the nightly fireworks spectacular.

However, referring to them as drones does not do them credit. The drones, which are based on the Parrot BeBop 2 quadcopters (called for their four rotors), have custom software and hardware. Any extraneous components have been removed from the drones in order to make them as light as possible, allowing them to stay in the air for longer. They are only 550 grammes in weight, which is less than a loaf of bread.

They don’t have cameras, unlike consumer drones. Instead, a circular array of nine RGBW LEDs is positioned behind a dome on the front. They have the ability to change colour and turn on and off at the same time.

In its new show, Disney makes extensive use of them. The first drone display within a Disney park, called Disney D-Light, is a marketing masterstroke.

The show begins like most previous Disney presentations, with lasers being fired from the castle and kaleidoscopic scenes being projected onto it, all while the fountains in front of it dance to a catchy music. The drones then light up in the shape of a number 30, which looks like a big outline of Mickey Mouse’s ears gazing around the castle, as if by magic.

It’s an Instagram-worthy moment, and the crowd usually gasps in astonishment when the drones first light up.

But that’s only the beginning. The drones then form an arc behind the castle that looks like the trail of a shooting star, as they light up one by one to mimic the entrance of Disney’s iconic cartoons. The drones’ lights decrease before they form diverse forms, giving them the appearance of appearing out of nowhere. They spread out across the sky at one point and flashed on and off quickly, resembling fireworks bursts.

The drones form a smaller silhouette of Mickey’s ears, which revolves inside an orb of tiny twinkling stars, in the show’s mesmerising crescendo. For Disneyland Paris, it has opened up a whole new world.

Since then, the magic formula has been perfected in Disneyland Paris and copied in son et lumière presentations at the park’s sister parks throughout the world. To commemorate its 30th anniversary, Disneyland Paris wanted to come up with something fresh, and louder and longer fireworks displays were not going to cut it.

Drones were a natural choice because they are silent and don’t emit ash that could drift into surrounding structures. Drone displays have grown in complexity and reliability over the last decade, although they are still uncommon in amusement parks.

In 2016, Disney’s only previous regular drone presentations took place above a lake in its Orlando shopping and dining district, rather than inside the amusement parks. However, there is a valid reason for this. Theme parks are densely packed with cutting-edge infrastructure that can interfere with the GPS signals sent back and forth between drones during a show.

Although the drones in a display may appear to be operated remotely from the ground, their flight routes are really automated and directed by a central computer system. The drones interact with each other using GPS to keep the proper distance between them and avoid collisions. It took more than a magic wand to ensure that the 167-foot castle in Disneyland Paris didn’t block these signals.

“Drones employ GPS and a specific Wi-Fi system for positioning,” says Ben Spalding, producer of Disney D-Light. “Any metal structure may and will reflect those signals, so you’ll have to test and retest at various times of day, at various frequencies, and in various situations to get it correct.”

Disney approached Dronisos about the new programme around a year ago, according to Spalding, and development took eight months. Surprisingly, the process of generating a drone show is remarkably similar to that of making an animated film. Spalding says, “We start with creative thinking.” The design team then creates storyboards depicting the desired shapes and motions, which are then directly converted into flight routes for the drones to follow. This is accomplished using animation software, which also provides a 3D depiction of the show so that it can be viewed from any angle.

Disney and Dronisos conducted four drone rehearsals in Bordeaux and ten at Disneyland Paris for the final stage of development. “Keeping it hidden was the hardest thing, and one of the most crucial things,” adds Spalding, “because it’s what generates that feeling of wonder for our guests when they experience the performance for the first time.”

Ironically, the epidemic aided Disney’s privacy by requiring 90 percent of creative development to be done online rather than on location. “Because we are not alone operating at night, in-park programming is also a huge problem,” explains Spalding. “Having dark time for lights, media, and drones is essential, but it isn’t always possible.”

“We also needed to do a lot of recording, and we’re lucky to have our own backstage recording studio with outstanding sound engineers to mix.” It offered us the flexibility to alter and recreate as needed, which is essential for complex shows.”

Having a close-knit group also contributed to the show’s secrecy. According to Spalding, the main manufacturing crew consisted of only ten employees who covered a wide spectrum of specialties. “They included overall show producers, music and audio producers, lighting and media designers, a production manager, show director, engineers and support employees,” Spalding continues.

Despite the fact that the shows are computer-controlled, a pilot must be on hand at all times to do technical checks, ensure the flight area is clear, and give the final green light. Dronisos hired four pilots who prepare the drones for flight using a sophisticated dashboard display on a ground control station. Ground control assigns each drone a unique flight path, and they are all monitored in flight through a local, encrypted network for optimal safety.

Since its debut, Disney has added a phase in which Mickey’s ears replicate themselves when the drones separate into two rows, lengthening the spectacle by a few minutes. According to Spalding, there could be additional changes in the future. “This is our first time,” he continues, “so we’re learning as we go.” “As with any new show or experience, we prefer to listen to our guests and their feedback. We could experiment with various choreography — we’re just using 10% of the drones’ capabilities right now, so the possibilities are unlimited.”

It’s easy to see Disney deploying drones to replicate its iconic performances without having to invest in new infrastructure. A 45-foot robotic dragon battles Mickey Mouse in rhythm to an inspirational musical composition is one of the most popular presentations at its US parks. Drones might not only be utilised to reproduce the dragon, but there would also be a theatrical revelation. It’s possible that its luminous eyes would gleam in the night sky before the rest of it did.

The usage of more drones allows for more detailed scenes. More than three times as many drones are employed in the most extravagant performances as in Disney’s, resulting in pictures that resemble floating advertising banners.

The maximum number of drones that can be utilised in a show is determined by several factors. Each drone must be spaced at least a metre apart on take-off to avoid GPS signal interference. To avoid interference, they must be at least a metre apart when flying. This isn’t an issue in clear air, but it becomes a problem when there are big structures or a lot of air traffic.

The expense of employing drones can be prohibitive as well. Dronisos’ outdoor presentations range in price from £33,705 (€40,000) to £252,784 (€300,000) for displays with over 1,000 drones. The lower end of this range corresponds to the cost of a high-end nightly theme park fireworks display, while Disney’s drone show may be less expensive because to the economies of scale that come with performing it on a daily basis. In a statement, Dronisos says it has “an option for permanent/recurring drone performances for theme parks, circuses, and other venues.” These are tailor-made shows and the pricing will depend on the requirements.”

“There are no fixed-price brackets for drone light shows because each show is tailor-made precisely for a certain event,” it continues. When creating a show, many elements are taken into account, such as the country hosting the exhibition, whether the performance will be held indoors or outside, and the overall budget.”

Choreography, 3D simulations, and rehearsals are all included in the price. Drone flight duration is limited to 15 minutes, however adding more isn’t as simple as adding new scenarios. It all comes down to the battery life. The lighter the drone, the less power it requires to stay aloft. The heavier the battery, though, the more power it possesses and the longer it can stay in the air. It’s a delicate balancing act, but one that’s crucial given that Disney’s fireworks shows often last three times as long as its drone show.