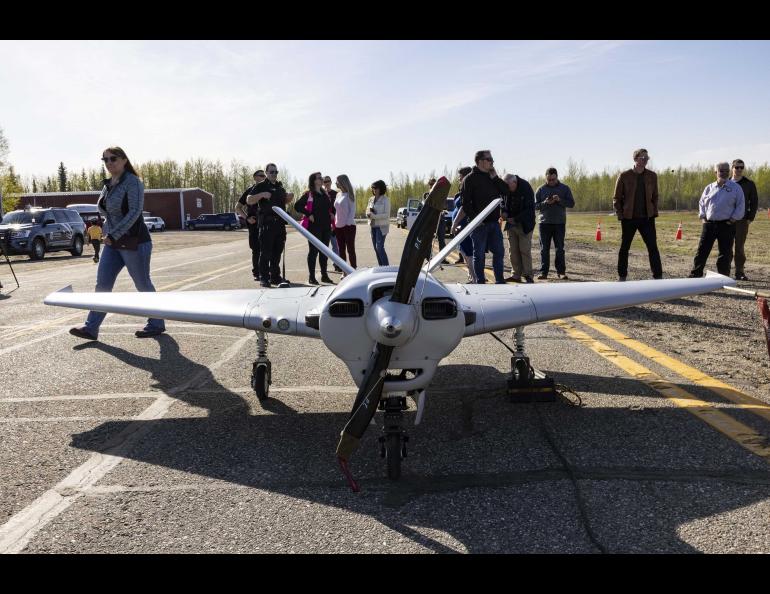 On Sunday, an unmanned aircraft operated by the University of Alaska Fairbanks took off from the general aviation sector of Fairbanks International Airport, marking a watershed moment in the endeavour to safely integrate unmanned aircraft into controlled airspace.

The flight was the first civilian big drone operation in Alaska, and it took off from an international airport.

The Sentry aircraft took off from the airport’s general aviation runway and flew in a pre-determined flight pattern for departures, arrivals, and runway approach practise. It was controlled remotely from the ground control station near the far end of the airport’s East Ramp by UAF Alaska Center for Unmanned Aircraft Systems Integration personnel.

The light grey Sentry, which has a wingspan of over 13 feet and weighs 280 pounds empty, landed safely and came to a rest on a taxiway.

ACUASI Director Cathy Cahill remarked, “This historic trip for Alaska is the result of the dedication of the ACUASI team and our wonderful partners at Fairbanks International Airport, the state of Alaska’s Department of Transportation and Public Facilities, and the Federal Aviation Administration.” “This flight is a critical first step toward developing Alaska’s drone economy and improving freight and mail delivery to remote Alaskans.”

The milestone was made possible, according to Cahill, by strong support from the University of Alaska, the Alaska Legislature, Gov. Mike Dunleavy, and Alaska’s congressional delegation. She also stated that the FAA’s Beyond programme was important in gaining the necessary clearances to fly this and future large drone operations for cargo delivery and other critical Alaska tasks.

“Drones have a lot of potential in places like Alaska.” “They have enormous economic potential for our companies and industries,” Dunleavy added. “But, perhaps more crucially, they have the ability to assist Alaskans when they are most in need, such as during disasters and emergencies like wildfire surveillance or dropping essential supplies during a search and rescue.”

The Sentry was handled like any other aircraft, which is how unmanned aircraft are supposed to be integrated into the airspace.

The Sentry, like all other aircraft flying in controlled airspace, is equipped with a transponder that informs air traffic controllers of its location and altitude.

The flight on Sunday was the culmination of years of planning and collaboration with airport and FAA personnel.

Commissioner Ryan Anderson of the Alaska Department of Transportation and Public Facilities remarked, “Alaska is leading the world in drone research with a degree of professionalism that our entire aviation sector is known for.” “This is a professional pilot flying a plane in controlled airspace at a major international airport.”

The University of Alaska Fairbanks is one of just seven FAA-approved test facilities in the country, and the only one in Alaska, according to ACUASI.

ACUASI possesses a number of unmanned aircraft, as well as ground control centres, antennae, generators, and other related equipment. It is capable of being deployed anywhere on the planet.